I’ve been neglecting this blog since last September. It’s fitting, in a way, that while I am no longer in last September, my site is. You’ll get that reference once Mike and I finally get around to releasing our EP. Or maybe you won’t, who knows?

One of the #ThingsIDo is manage and play on a Sunday league soccer team. We play in GPSD, and our team name is Bad Lads FC, but I’ll talk more about that in a bit. What’s most important is that the Spring Season just started, and I’m going to do my best to chronicle it here. That’s right, pity thyself reader (who am I kidding), for this is about to turn into an amateur soccer blog for the next few months.

First, some background on the competition. GPSD has two divisions in its open age bracket (I’m 24, so, we definitely don’t play in Over 30s). We play in Division 2. This season, Open Division 2 has six teams; it’s a ten game season, so we play everyone twice. Our first match was this past Saturday, March 10th, and our last match will be June 24th, unless we finish in the top two spots and make it to the final. GPSD plays three seasons a year; Spring and Fall are 10 matches each and features promotion/relegation, Winter is five matches and does not.

The six teams are as follows:

Bad Lads FC – Hey it’s us! We’re a rag-tag group constantly struggling with roster turnover, and have previously struggled with getting enough guys to show up to games. While we still have a lot of new guys this season, we’re off to a positive start and will hope to build on what seems like a promising roster. This is only our second Spring Season (our first was Winter ’17), so we’re still pretty new compared to some other teams.

Toffee Club – Toffee Club have been around since Spring of ’16, and they definitely have a more consistent, steady group of players than we do. They’re a historically good team that can beat anyone on their day, but only finished 5th last Fall and 3rd the Spring before (above them were Por Que No, who promoted that season, and Naranja (then called LCLS) who promoted last season).Toffee Club and us are pretty close, as far as competing teams go. We play a lot of friendlies with them and even organized a little mini Winter league together this year after GPSD couldn’t get enough teams for theirs.

Por Que No – Por Que No were in our division early last year, but dominated everyone and promoted into D1 after the Spring ’17 season. They proceeded to then get dominated right back down to D2 in the fall. They used to be very good, although sometimes struggled with getting enough guys to show up (I wonder how that feels /s). I’m not sure how good they are now, or how many of their same players they have. We don’t play them until mid-April, so I’ll just have to keep an eye on their results until then.

FC Portland Firefighters – Firefighters are a team that have struggled as long as I’ve been involved in the league. Last GPSD season, they finished last, while we finished second-last. They beat us 2-1 in our last match of the fall, but we played the whole match with ten men (for the third time that season), so I wouldn’t necessarily say that was a fair result. If there’s any team in the league that we should be looking for six points from, it’s Firefighters.

Cancho FC – Cancho are one of two new teams in our division. Cancho was founded this Winter by someone who left our team to start his own. He took with him a few of our other players. I wouldn’t go as far as to say there’s a grudge between our teams, but I would say that I think both teams will have something to prove when we play them. Our first meeting is this Saturday and I’m definitely looking forward to it.

FC Evergreens – Evergreens are the other team new to the Open 2nd Division, having previously played in Over 30s 1st. Glancing at their past league finishes, it looks like they finished last in Fall ’17, and sixth of eight in Spring ’17. I really have no idea how Open 2nd compares to O30s 1st in terms of competitiveness, so it’ll be interesting to see how they do in our league.

Our first match of the season was against Toffee Club, and considering our last match against them was a Winter Friendly that ended 9-0 (in the bad way), I was a little trepidatious heading in. Granted, we had ten men to start that match, and finished with nine, and also were missing a lot of our first-choice defenders. Still though, it’s tough to feel confident against a team that just 9-0 trounced you regardless of the circumstances.

I like to play with formations with our squad, partially because the constant-changing nature of our roster almost demands an element of flexibility. What worked with one group won’t necessarily work with another. On the same leaf, what works against this week’s opposition won’t always work against the next’s. In this case, I think the frequency with which we play Toffee Club helped me prepare.

In the distsnt past, Toffee Club has beaten us using a lot of overlapping runs through the central areas. They suck in our center mids and just go around, creating chances and shots for their long range shooters. Last time we played them (the time we got trounced), we lined up in a narrow 4-4-2 diamond to try and counter that. 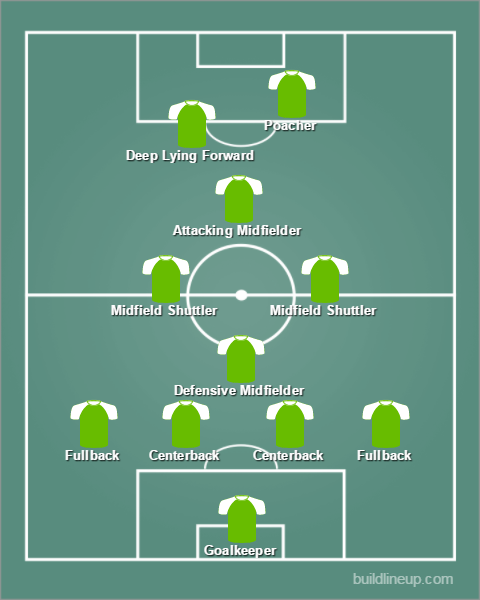 Obviously it ended up being a 4-4-1, and then a 4-3-1, and also didn’t work at all. They overloaded the corners, putting our fullbacks in 3-on-1 situations and easily exploiting our disorganized, never-really-played-together defense.

I knew we had to do something different this time, but I wasn’t sure what. I love the modern game, and I love creative tactics. I have a tendency towards single-striker formations, and in seasons past we’d done a lot of 4-5-1, 4-1-4-1, or even a 4-3-3 for a while.That said, the more I looked at our roster for the season, the more I realized how perfectly we’re set up for a classic 4-4-2. We have a fast goal-focused forward and a more creative one. We have speedy wingers. We have clever, defensively honest central midfielders. We have athletic, two-way fullbacks and strong, tall centerbacks.

So I knew how we’d line up, but I still had questions to answer: How do I get a group with so many new additions to play together cohesively? How do we beat Toffee Club?

Because of the first question, I knew that whatever the answer to question two was would have to be simple. A concise, 2- or 3-point, straightforward plan that gave strangers an idea of what kind of movement they should be looking for from each other. As to question 2? Here’s what I came up with:

Before kick off, I outlined my simple plan to the squad, some of whom I had met only minutes prior. I even used my trusty magnet-board to outline a couple of the points. Then, things got started and it… worked? Right away we were getting the kind of movement we wanted; Jubba even came within a few inches of scoring from a deep one on one with their keeper about two minutes in.

Despite almost going up early, the biggest immediate impact was how solid our defense was. We gave up a couple chances in the first half, but new keeper Aidan consistently came up big and they didn’t seriously threaten our goal until later in the second half when the game was opening up more.

On the attacking side, avoiding the corners worked well and we created a fair number of chances ourselves, but near the end of the first half they figured it out and started gumming up zone 14 to the point that every time Jubba (or another of our guys) received the ball there, they’d have three defenders on them.

At halftime, we made a couple of small adjustments: I reemphasized the need to create space in the center of their defense before putting the ball there; and I put Nathan and Sang next to each other in central midfield for the entire 45, after having seen them partner well for 20 minutes or so in the first half.

The game opened up more, and while we had a couple scrambles in front of our goal, we created the majority of the chances and had great pressure throughout the half. Matt played a corner on the ground to Tyler S who chipped it on target only to be cleared off the goal line by a defender. Nathan had one from distance that whistled by the post. Eventually, around the 85th minute, Sang played a ball through, one of their centerbacks got a foot to it (playing Jubba onside), but couldn’t stop the ball or even really alter its trajectory. Jubba was clean through and sank the shot alone with the keeper; 1-0.

What happened next was incredible. The whole team shifted mentality so well that it felt like I’d hit left d-pad a couple times in FIFA. All of a sudden we were sitting back and wasting time and all-around frustrating our opponent without giving up anything resembling a chance. Matt instinctively dropped back to play a more midfield role before I subbed him off to put on Grant as a true defensive midfielder, shifting our shape to a 4-1-4-1. Jubba stayed on to chase clearances and provide some pressure on their back line.

In the end, we walked away with three points and a promising start to our Spring campaign. All in all, it was a very fun, very competitive match between two evenly matched teams. Russ even said afterwards it was the most fun he’d ever had playing organized soccer.

This weekend we play Cancho FC. As I mentioned earlier, they’re a new team started by one of our former players, featuring a few other guys who left our team for theirs. I don’t know anything about them as a team, although I know those players pretty well. As such, it’s going to be difficult to come up with a plan to counter their style, and I’ll have to focus on our strengths. If we play like we did last week, I fancy our chances; and I think our veterans will be extra fired up for this one.

This site uses Akismet to reduce spam. Learn how your comment data is processed.